The first iteration of the project is a Magic Leap One game titled Super Galaxy Knights: Archer Archives.

Super Galaxy Knights: Archer Archives is a mixed reality game set in the Super Galaxy Knights universe. The goal of the experience is to mix immersive 3D comic panels in with action gameplay, utilizing all the tools that the Magic Leap One has to offer.

Here is the planned game flow:

Diamis Artene is a reformed assassin who is looking for honest work to support her family. She is called in by Ty Kuna, a wealthy tech CEO, to work for his team of bodyguards. However, she soon finds out that Ty may not be the sort of person worth protecting…

The Capstone Advisor for the project is Lindsay Grace.

The current prototype has the first half of the first chapter of the game. It demonstrates menu, comic panels, archery gameplay, & scoring. There is currently no audio, but there is controller feedback.

Here is the feedback from the prototype:

The project “Archer Archives” was abandoned. The bow & arrow and 3D comic gameplay was interesting, but it felt clunky due to the limitations of the Magic Leap One.

PAINTING GHOSTS (working title) is a game designed around the limitations of the Magic Leap One first, with the level design and story aspects coming later. The goal of the project is to first come up with simple mechanics that are built around the restrictions of the hardware, then build a simple game to be released to Magic Leap World by May.

The following is the current iteration of the design:

The plan is to have the entire game finished and published on Magic Leap World by May.

This is the initial prototype: 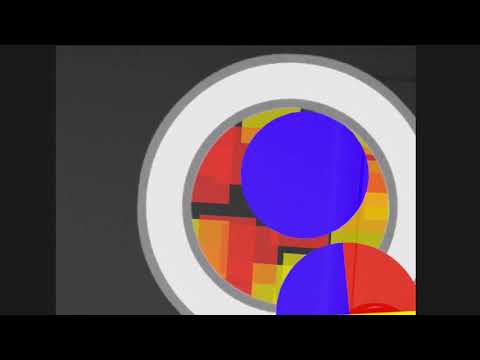 The game presents the ring to the player as a “lens” that lets them see ghosts through it. This provides a physical model for why the user would be able to see the real world through the goggles with a much larger field of view than the game objects. The game entities are all “ghosts”, so you can only see them in a small “lens”. 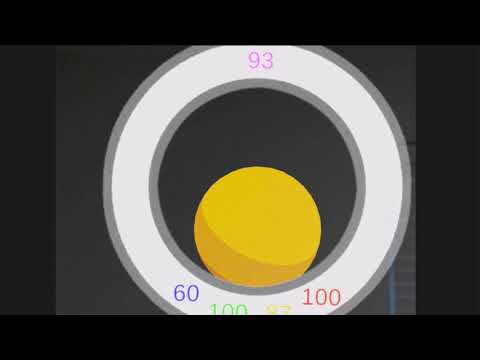 Today a few people tested the current prototype, and I got some useful feedback out of it all! Here’s some of the highlights, and how I plan on addressing them moving forward: 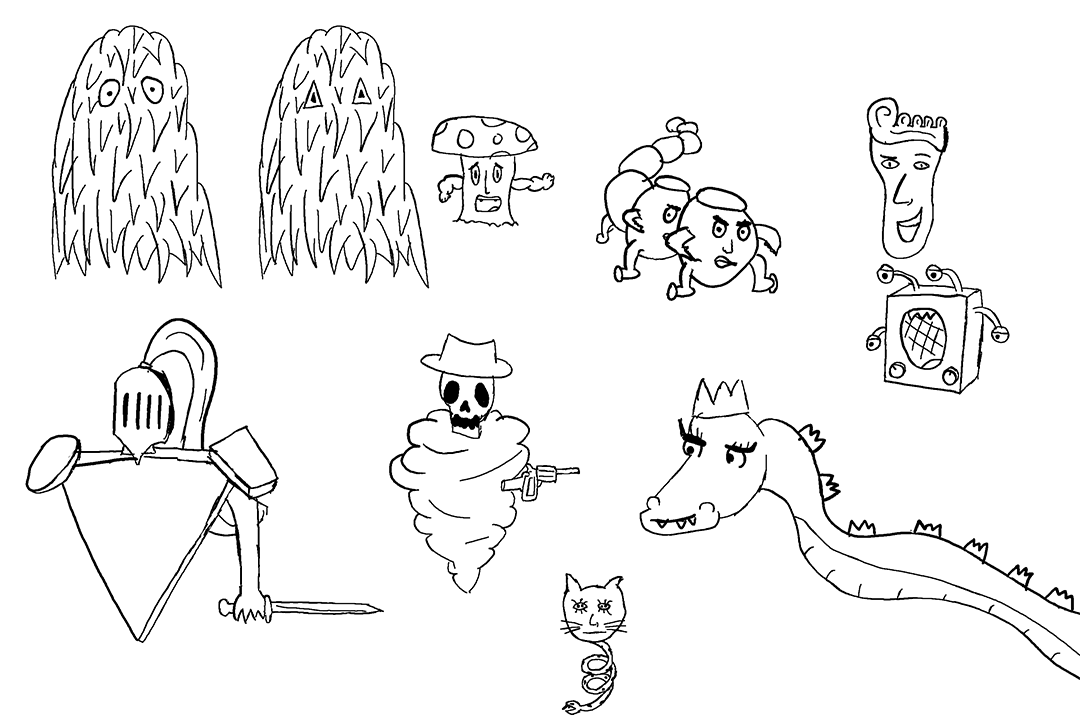 The general concept with these ghosts is to create designs that are both “cute” and “scary” – something that will fit with a simple, cel-shaded art style, but creepy nonetheless.

The “shaggy ghost” is intended to be the “default” ghost type – it would float directly towards the player, like the spheres in the current version. The “speaker ghost” would have similar behavior, but would take more paint to defeat. The “foot ghost” would always try to go behind the player, making them more annoying to deal with. The “cat-snake ghost” would make a bouncing motion as it approaches – its up and down movement making it harder to hit. The “mushroom ghost” would grow in and out of the ground in an attempt to get closer to the player. The “centipede ghost” would weave back and forth as it approaches the player, and you would have to destroy its tail (or destroy every segment) to beat it.

The “knight ghost”, “cowgirl ghost”, and “serpent queen ghost” are intended as boss characters. The “knight ghost” would have armor of different colors – you have to destroy each of the armor segments before you could destroy the ghost. The “cowgirl ghost” has a magic revolver that can change the colors of other ghosts in the world – the player has to be able to swap colors quickly to defeat her. The “serpent queen ghost” would be massive – so big that you won’t be able to see her entire body at once. The player will have to spray paint in her mouth when she opens it to attack them.

One other concept I have with these ghosts is that certain shapes would change depending on the colors – for instance, red ghosts would have circular shapes on them, but green ghosts would use triangles. This would be done to accommodate for color-blind players – red, green, and yellow, may be difficult to distinguish for many players, so for them the shapes should provide a clue as to which color the ghost is supposed to be. 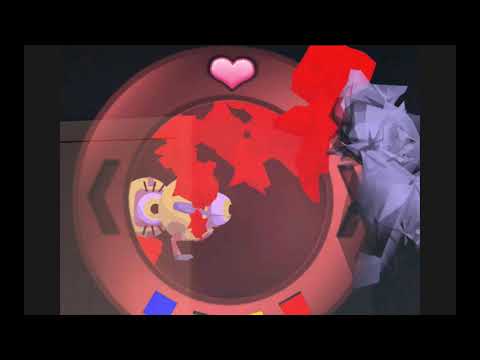 A new prototype was finished today. Here, there were a lot of aesthetics updated, which should make the game’s functions make more sense. 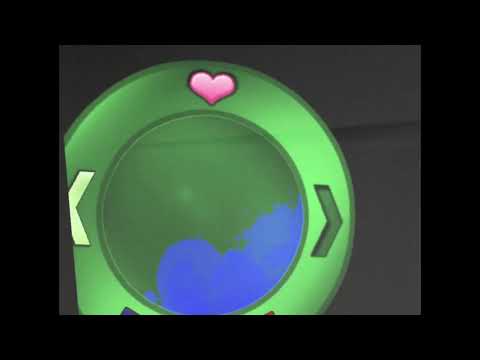 Not too many changes in today’s prototype.

A bigger ghost variant was added, that moves slower and takes more hits to destroy. However, I still don’t have new models created for the different variants yet.

The color wheel now flies towards players instead of hanging in the middle of the ring. Additionally – the UI on the ring for the different paint colors doesn’t appear until the player gains the ability to change colors.

Finally – ghosts are now only damaged by their matching color, rather than the reverse. 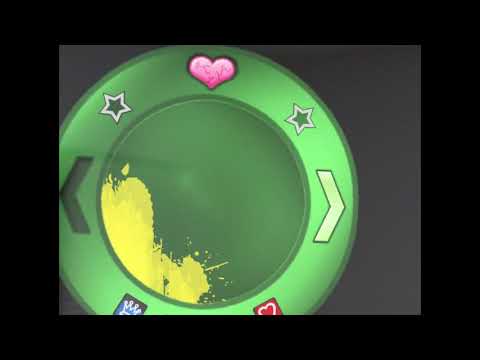 In this update, symbols were assigned to the colors so that colorblind players can enjoy the game – red colors get hearts, yellow gets a treble clef, green gets stars, and blue gets crowns.

Additionally, a new ghost type was added that moves very quickly and tries to get behind the player. 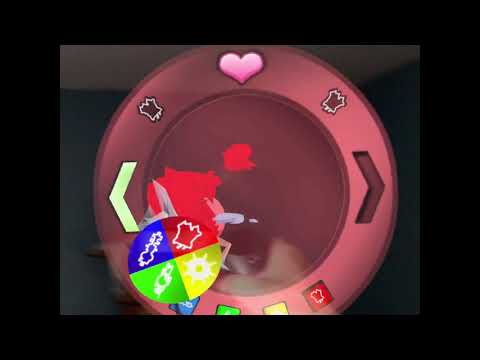 There’s been quite a few changes in the latest prototype! 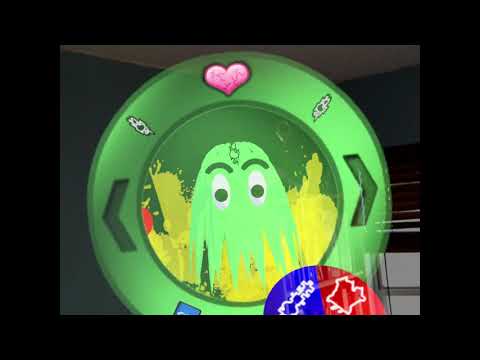 The major things changed in this update are the main menu and the addition of Level 2.

On the main menu, the player can select which level they want using the touchpad, and press the trigger to confirm. Eventually, each menu option will have its own icon. I’m planning on displaying high scores on the menu, but I’m still trying to figure out how to best take advantage of the real estate.

In level 2 – two enemies come at the player instead of one! This is also the level where the centipede ghost will be introduced to the player. At the end of the level, the player will face Hazza, a ghost of a cowgirl. Her bullets change the color of ghosts in the area. I probably have to tweak some things for difficulty, but… for now, this is how it is!